Previously, I mentioned the bizarre timing.

Two years ago, around the end of October, I ran into a friend at the bookstore. He was bandaged and seemed rather disheveled. He was wearing a hospital bracelet. A few days or weeks later (I can’t remember), his wife called to let me know that he had disappeared. I figured that he was as good as dead. And so for the past two years, I listen to some of the music he wrote in November and I think briefly about our friendship, what I learned, what I could do better in current friendships, and pray for his family, etc.

Now, his disappearance could have meant anything. He possessed a powerful intellect. His desk in his home was always riddled with strange old electronic devices he would repair: oscilloscopes, out of production media players, decaying monosynths, disassembled miscellany, and disorganized sundries, etc. But he also had great facility with learning languages, very difficult mathematics, music history/theory, and a vast knowledge of philosophy, theology, the occult, and Jungian psychology. He knew chemistry and sometimes did impressive tricks. And he had a knack for surviving in the wild. His never-ending curiosity was unnerving. But certain desires that drive people can becoming so consuming that they destroy rather than enliven, his was for knowledge. As he would say, unchecked desire could dissolve rather than coagulate.

He always reminded me of Andy Kaufman. He loved the eccentric and would happily take a joke too far just because he enjoyed it. In high school, the song “The Great Beyond” would remind me of him as much as of Kaufman. Part of why I became friends with him guy was our similar sense of the absurd. We were in a band called ECP, the Exploding Chaos Parade. With the exception for four or five people whose opinion he really valued, he was immune to group norms. That immunity to the opinions of others is very freeing.

While I was writing the other post, I had this sudden hopeful thought: what if he came back…what a train wreck that would be, but he’d be alive, be there for his kids (in some capacity) and probably have some wild stories. My natural pessimism reminded me that this isn’t a movie. Anyway, his wife called me a week later, to the day, to tell me his remains had been found.

But what was weird about it all was the day I ran into him, prior to his disappearance, we talked about Carl Jung’s book Synchronicity and potential overlap with Rupert Sheldrake’s concept of morphic resonance. Synchronicity is Jung’s term for coincidences which are not causally related, yet are meaningfully connected. That’s what made the timing of the phone call, the text, and the delayed moment of remembrance of my other friend all so bizarre.

Here’s an example of his music:

Here is an absurdist collage he made for reasons he didn’t even know: 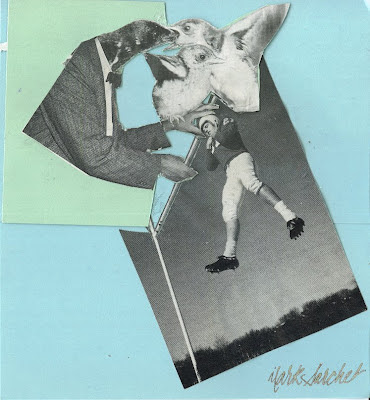 I don’t mean to romanticize my friend. He was a broken man. Everybody is haunted by demons, may God give us the strength to face them.